NASA’s recent STEREO (Solar TErrestrial RElations Observatory) project is a mission to capture the sun in three dimensions. The two-year long project involves having two near-identical telescopes (one ahead of earths’ orbit and one behind) to record the behavior of the sun, studying phenomena like coronal mass ejections.

Lenox Laser fabricated custom parts for the Government and provided consulting services in support of testing the focus setting of one of the STEREO instruments during satellite integration at NASA/Goddard Space Flight Center.

The project was nearly ended until Lenox Laser assisted with a critical a successful test. As a result, Lenox Laser was awarded the NASA/Goddard Space Flight Center Instrument Systems and Technology Division 2006 Contractor Team Spirit Award.

On June 8th, Pastor Tom Cordock from Lenox Laser brought his telescopes and binoculars equipped with special optics to view the Venus transit over the sun. He was able to capture some magnificent photos of this historic event which are shown at the bottom right. This special event last happened in 1882 and British astronomer Jeremiah Horrocks recorded the first transit of Venus across the sun in 1639. You will have to wait until June 6, 2012 to see this again.

Lenox Laser is also playing a role in the Messenger Mission which should be taking off this month and begin its voyage around Venus in order to study the innermost planet, Mercury. 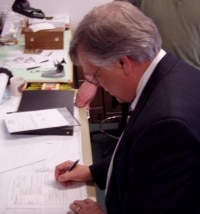 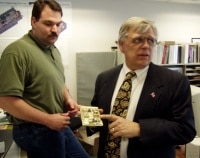 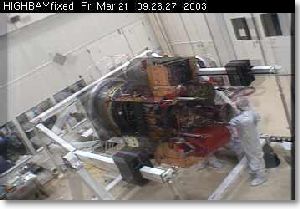 National Institute for Standards and Technology (NIST): Lenox Laser Fabricated an array of 5,000 orifices, each less than five microns, on a stainless steel conflat, for use as a standard, midrange high vacuum leak.

This special purpose space mission that has been proposed to NASA Headquarter’s Discovery Program as a practical method for detecting Extrasolar Terrestrial Planets, that is, rocky and Earth-size. Lenox Laser fabricated a custom Starfield Plate for the Kepler Mission.

“The star plate has a large number of holes of various sizes (used to perform time-variant relative photometry) and they are placed in many locations across the field-of-view to support the suite of tests described earlier. The plate is made of 50-micron thick stainless steel and opaque (transparency of less than one part in a million). The hole pattern was drilled with a laser beam by Lenox Laser, with some holes as small as 3 microns diameter (for the mv=19 stars).

There are 84 holes for the 9<14 target stars in the uncrowded region of the plate. These are used to isolate the effects of faint background stars, bright stars, smearing, etc. Some of these have very nearby stars as faint as mv=19 to demonstrate that stars five magnitudes fainter than the target star are not a problem even when spacecraft jitter is simulated. Bias-Smear Graphic of 84 Star plate Array There is a crowded portion of the plate with 1540 stars having the same star field density to mv=19 as the actual Cygnus region to be viewed by the Kepler Mission. This region was used to demonstrate the ability to perform the high-precision relative photometry even in crowded fields."