Lenox Laser’s Bob Gidner, senior Flow Engineer designed and built a doughnut orifice nozzle for the World Trade Center fountain in New York City back in the 1970’s. The 16 foot circular nozzle would displace a flat sheet of water over the fountain. Then the water would ripple down on a 100 foot circular piece of granite.

Over 12,000 gallons per minute would flow evenly out of the stainless steel doughnut shaped nozzle. Bob managed an entire division which helped build the nozzle at Zurn Industries Inc.

Bob has a scale model of the Towers and the fountain for the memory of all of the hard work that he contributed into making such a beautiful fountain. The towers were crafted by the Danbury Mint.

On September 11th, 2001 the fountain received a gash on one of its sides but it still remained structurally stable. The sculpture has been placed as a memorial in Battery Park directly adjacent to Hope Garden and the New York Harbor. 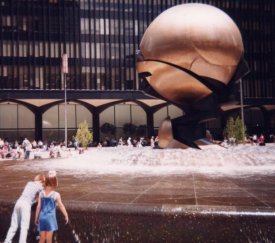